I grew up roughly 1 km east of the Austrian border, near a picturesque location of historical significance. This is the confluence of the Danube and Morava rivers, punctuated by the ruins of Devín Castle. The process of dismantling a system of double-wired mesh fences, guard towers and barriers that ran alongside the waterfront - aka. the Iron Curtain - began on December 11, 1989.

I feel a strange need to tally, process and signify the event and location. In an eerie, intertwined manner, the stories of its collapse and their effects are also the stories of my own timeline, adding up as the biggest generational gift I was given.

TL;DR: Exit rights, free information flow, freedom of and ease of choice are important to keep at all cost 😜

The Devín Castle area as illustrated by one of my favorite 3D artists and collaborators, Stuart Wade aka. DLGENCE. Check out the "making of" livestream.

As part of an important trade route, the area has been fortified since the Bronze Age. Almost every major regional player in history fought for control here — The Franks, Moravians, Hungarians, Croats, Ottomans, Napoleon's France, Slovaks, Nazi Germany, and by proxy, even the Soviets. The Czechoslovak satellite state ended up chaperoning the castle ruins between 1945-1993.

The term Iron Curtain was coined by Violet Paget in her 1914 article "On Bach's Christmas Music in England and in Germany". It was later popularized by Winston Churchill in his 1946 speech "Sinews of Peace"1, which kicked off the Cold War era. The barrier construction along the Czechoslovak border started in 1948. The border was no joke; it became virtually impenetrable around 1952. The exclusion zone represented 1.5% of the total area of the country. The earliest iterations of the barricade systems featured landmines. They were later removed due to the frequency of border patrol accidents.

During the Iron Curtain's existence, more border guards died in total than civilians - 654 vs. 450. Most of these have been booked as "accidents" or "suicides". The fortifications consisted of three plots of barbed wires. The fences in the middle were electric, running high voltages between 4000 to 6000 volts. Designed to instantly kill on contact, they were not advertised or warned against by signs. Nobody knew about the electricity, including the occupants of nearby villages. The outer lines were a way to manage maintenance overhead, as animal crossings would disclose the true nature and cruelty of this grim trap. Still, mishaps and deaths were common enough. The electric fence was removed during 1968, following the brief period of liberalization known as the "Prague Spring". A system of wires, guard towers, nuclear bunkers, 85mm anti-tank guns and self-starter attack dogs ("SUPs") trained to kill remained2. 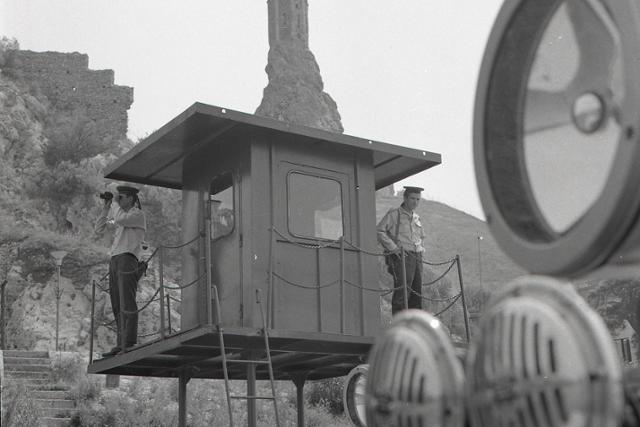 Border guards near the Devín Castle

Bizarre propaganda movie about the border guards from 1988

It's important to understand that these barriers were built to keep people from leaving. While it was technically still possible to travel, it was discouraged. The process of arranging all the documents, recommendations and permits took weeks and months, and was rarely granted. This was supposedly for your own protection. The relevant law read:

"In order to ensure the peaceful construction of socialism in our homeland, it is necessary to effectively protect state borders from all enemy infiltration of the camp of progress and peace." 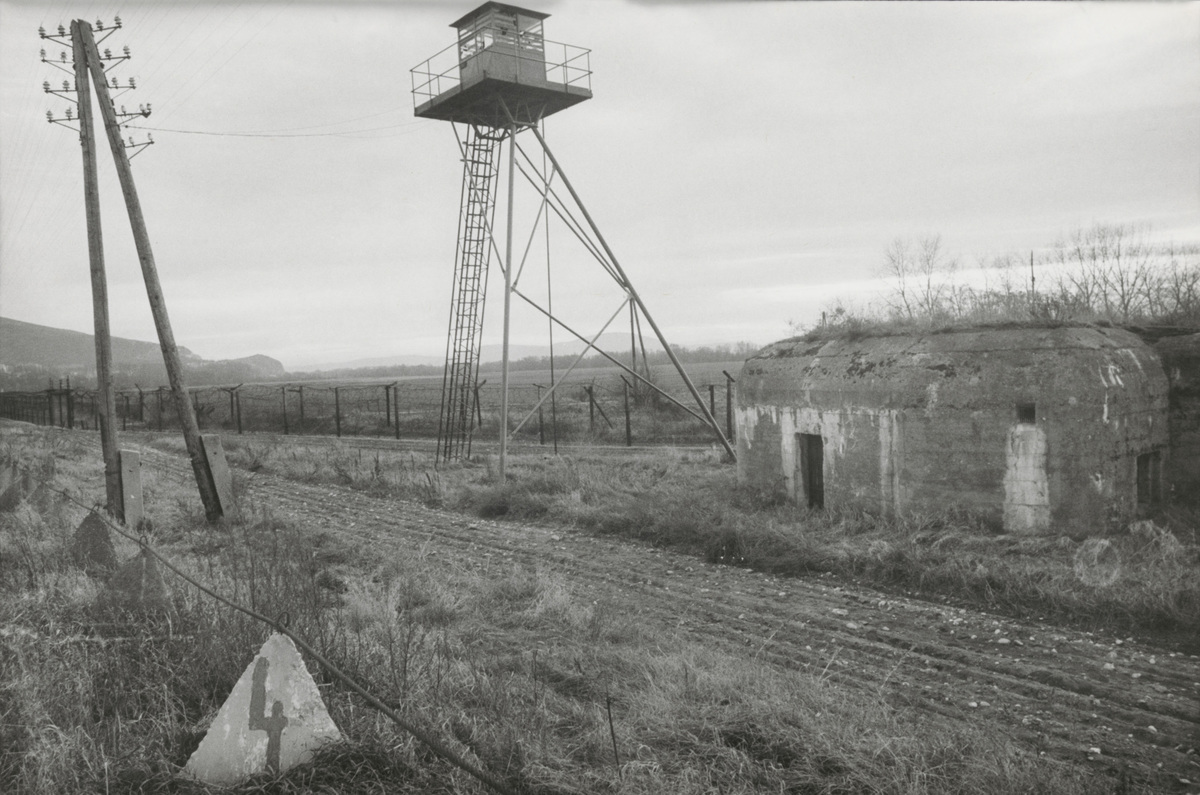 The crime of "leaving the republic" without a permit was punishable with several years in prison. The sentence often ended with work assignments in Uranium mines or other dangerous places. "Idleness" was also a crime. Refusal to work led straight back to prison.

On July 24, 1953, Václav Uhlík managed to escape with his family in a DIY modified tank.

An intricate system of social control got weaved into effect. Civilians enlisted to help the border guards as paid informants. Escape attempts became rarer. Not that people didn't try — there are stories of spectacular escapes using hot air balloons 🎈, DIY tanks 🏎, homemade diving suits 👨‍🚀, crawling through swamps 🐊, hiding in secret vehicle compartments 🎁 and many others.

Bless the souls of these brave heroes 🎖️ If I'd tried to pull this stunt 30 years earlier, I'd have been shot or mauled to death by attack dogs...😬

Life in the immediate post-WWII period was miserable everywhere, not only in the Eastern Bloc. Its collapse is often attributed in simplified terms. The classic narrative is about the superiority of market vs. centrally planned, command economies. But at first, Czechoslovakia experienced decent post-war investment and growth. This was backed by forced labor, natural resources and confiscation of private property — aka. collectivization. To the average poorer citizens, industrialization felt as much a miracle as it did in the West. Sectors in which actual market competition was necessary (aerospace, military tech) did reasonably well until the collapse. Moreover, the standard of living was markedly better in the satellite states compared to the Soviet Union. (In the estimation of my aunt, when I pressed her, by at least 60%.) After the 70s, economic growth reached its limits. Half of the world was blocked off from trade. Stagnation set it, but the economy was only part of the story. 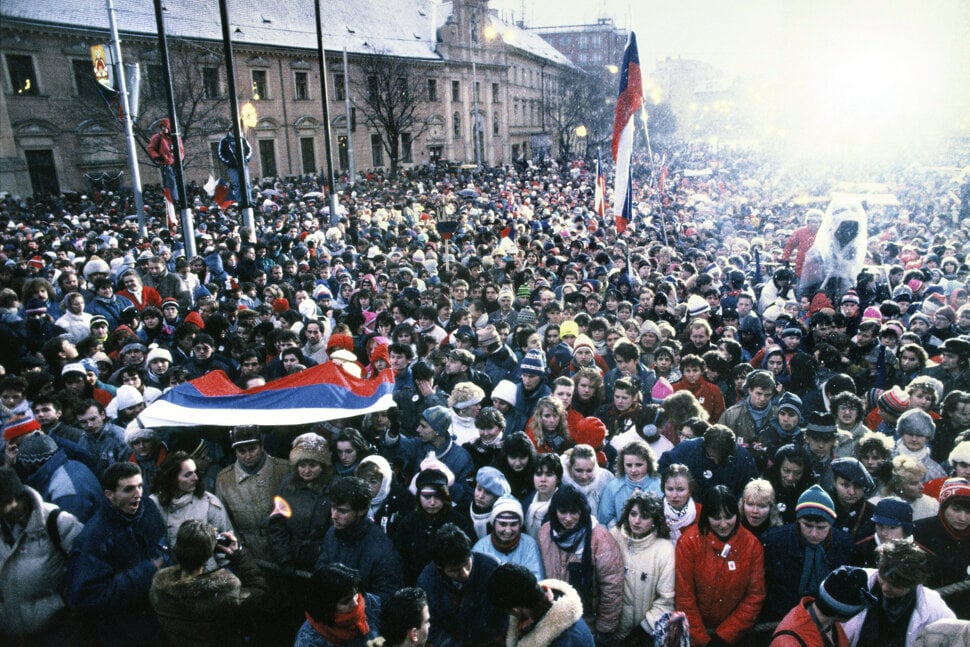 One of the 1989 Velvet Revolution protest gatherings in Bratislava. TASR

A bigger chunk of the truth is about processes inside people's heads. I still don't have a firm grasp of what life was like behind the curtain. Nobody could ever convey it to me in plain, explainable terms. But two-facedness and dishonesty seemed to be the essential qualities. Paradoxically, these became the vehicles for change. As the old guards churned away, public pressure against parroting drones increased. Meme waves about thinking for yourself crashed onto society with higher intensities. Information about the outside world poured in through unofficial channels. My parents and family claim that by 1985 it was all but a giant game of pretend — everybody was in on the joke, and kept going with it until the play got too boring.

As I was way too little, I don't have any conscious recollections of the revolutions happening around me. But I do have an internal sense of how those years felt. For a while, everything was grey and bleak, then the world became colorful and HD. Possibly me, some time after the transition of power.

The surrounding reality was darker, and I'm surprised how our parents managed to shield us from it all. During the 90s, Bratislava had higher crime rates than New York. Over 50 organized crime groups were active throughout the small country. In 1995, 98 bombs exploded resulting in 11 fatalities. There was total chaos and turmoil.

But for us, growing up in this context as children was a godsend. I was extremely lucky to have experienced the last shreds of "free-range" life. Unlike almost anyone else I met worldwide, I had a taste of real freedom. Compared to the metal-detectored high schools in the US or late-stage commercialized cities in Europe, we had both space and time. We played and skateboarded in abandoned construction sites full of broken glass. Our surroundings looked bleak and empty - but that emptiness also gave us space we could fill with our own imagination. And we felt we were in charge.

The best part was the obviousness of how nobody had a clue or handle on things. Authorities had no authority. After all, adults were built up by a suddenly obsoleted system. The notion that a school teacher would have authority about the future was glaringly laughable. That the police, the enforcers of the state, would have any authority at all — also laughable. It's hard to take the concept of a country seriously, when it's younger than your biological self. Most "grown up" characters in our game of life were rather comical, tragic figures. Politicians especially - assumed to be crooks by default, charlatans with no skills. It applied to all levels of life.

One had a general feeling of pity. It felt as if the agreed way forward became the path of least obvious bullshit, with fast corrections following false starts or wrong bets. For a while, the energy of collective discontent and disbelief was fertile enough to carry things relentlessly forward.

Then, things just happened. The country joined the EU. Border controls disappeared completely. Conscription was eliminated when the country joined NATO. We had lightning fast fiber Internet. Suddenly, all prices were in Euros, like everywhere else. All barriers were gone.

Internally, I always sensed that taking maximum advantage of our privileged timeline was some sort of a sacred duty. I often thought about those escapes when looking at the open border. I believed — perhaps aspirationally — that I would have attempted to escape as well. I owe it to those lost souls to go as far beyond as I could.

Unlike others in my peer groups, I meant my words and left as soon as the faintest possibility materialized.

I visit the area often, but it doesn't feel like "home". At this point I've spent most of my relevant years well within geographies that were completely out of reach when I was born. I have proven administrative ties to people from the enemy side. Over time, I took on the perspective of an interested outsider. I kept my distance, and gained the ability observe the scenery with a fresher set of eyes.

Despite it being trivial to move around, a virtual border and a divide of some sorts still exists. If you relocate to Austria, your pension suddenly doubles. Just by the notion of possessing a slightly different ID card, masses of people, largely identical in terms of intellectual capacity, beliefs and skills, experience markedly different life outcomes.

In general, things are going well. There's a strong sense of economic prosperity, and the city is starting to look more modern than most places in the former "West". Culturally, it's still lagging - there's an emphasis on material wealth and outmoded strivings (car culture in particular). Despite promising seeds of a unique, distinguished style, the current art & music scene is based on copying trends (markedly shifting towards Asia, as everywhere).

Ironically, I live 1 km from the former Berlin wall today, on the other side. 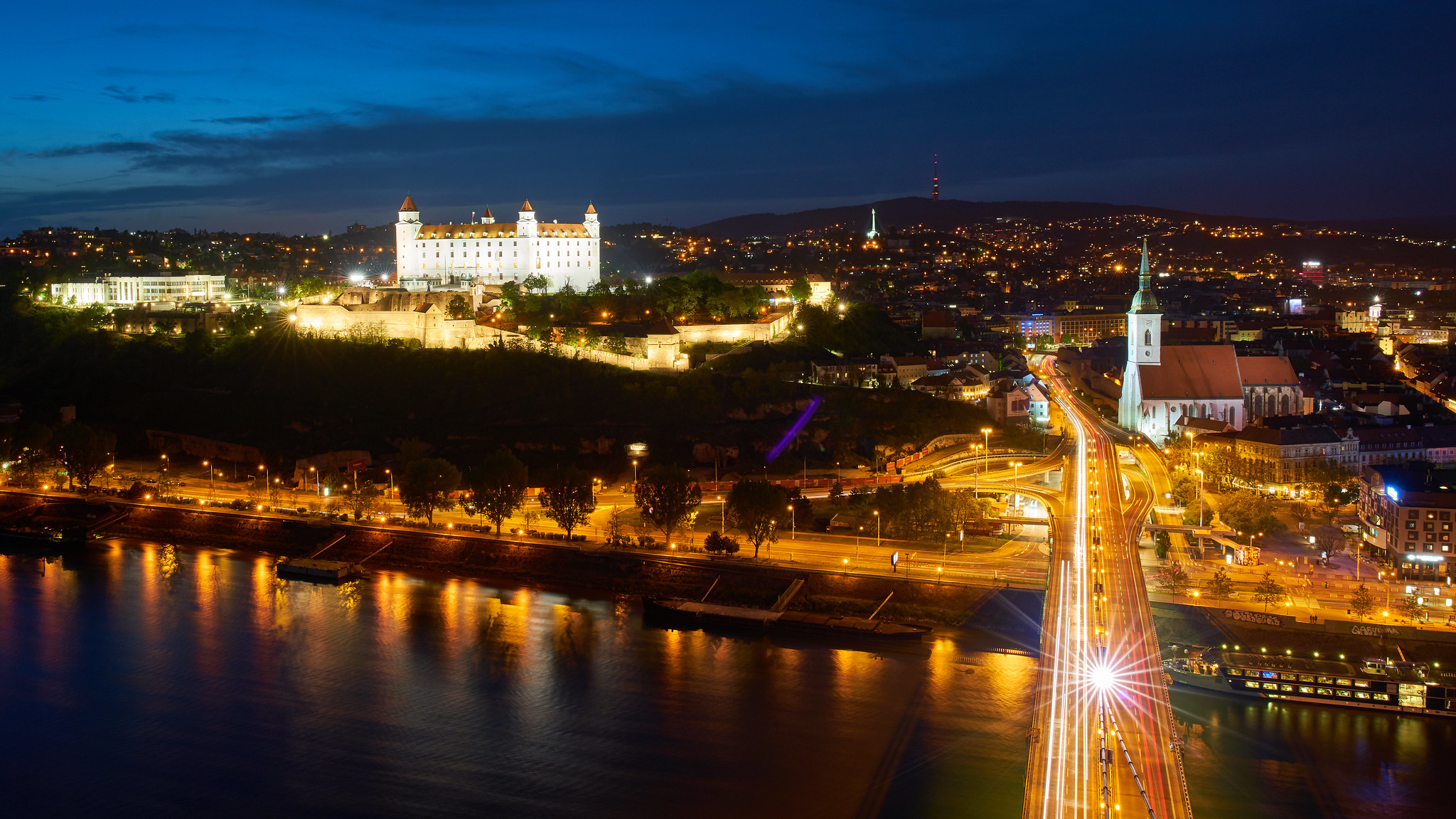 This post briefly made it onto the Hacker News front page 😍.Check out the discussion.

If you like the things I do, know that I'll always keep creating!

Please consider supporting me on Patreon, where you can also get early access to Songsling and other stuff I make.